Menu
Home
Events
CFP: The Making of a Social Movement: The Oratorical and Rhetorical Legacies of the Colored Convention Movement

CFP: The Making of a Social Movement: The Oratorical and Rhetorical Legacies of the Colored Convention Movement

The deadline for submissions has passed. Learn about the upcoming symposium at coloredconventions.org.

As both the digital project and edited collection remind us, the “Colored Conventions reflect the long history of collective Black mobilization before, during, and long after the end of the Civil War. As empowering hubs of Black political thought and organizing, the Colored Conventions provided space for informed public audiences to develop political plans and community-building projects, celebrate racial unity and protest state violence, and work tirelessly to secure Black people’s civil rights.” As Richard Allen in his address at the very first convention held in Philadelphia in 1830, one of the main reasons they met was to “obviate these evils.” It is this understanding of the Colored Conventions that makes them prime sites for the study of rhetoric.

Knowing that the convention minutes did not include speeches by women, as we did before, we also want to “highlight the organizational work of Black women who have been largely erased from convention minutes and hope to account for the crucial work done by women in the broader social networks that made these conventions possible.”

We also welcome papers that explore:

Proposals should include a description of the proposed paper (250-300 words) and a brief (no more than 3 page) CV submitted through our Google Form by July 1, 2022. Applicants will be notified by July 15, 2022. Organizers plan to consider papers from the symposium for publication in an edited collection. Please indicate your interest in possible publication in your proposal. Please email digblk@psu.edu with any questions. 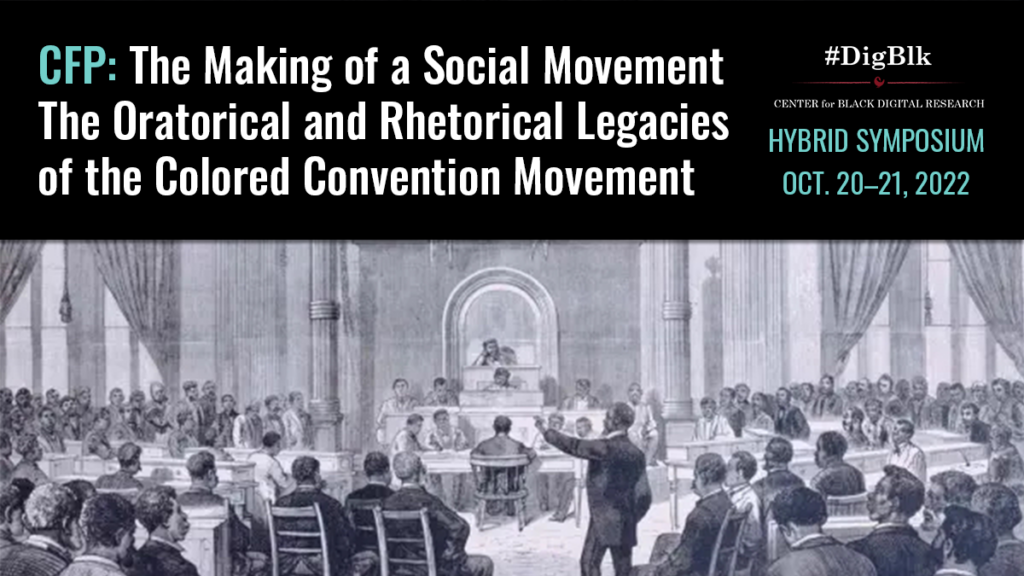